Yesterday we woke to a light covering of snow but we were determined to go for a walk to Tarn Hows.  Luckily the sun was shining so we wrapped up warm and set off mid morning.

We have been before and the last time was with my (Dean’s) sister and brother in law and there was an incident with an umbrella that turned inside out which we seemed to laugh for ages…..I guess you had to be there to have got the joke! 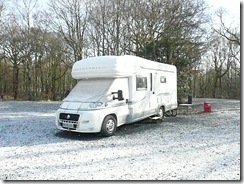 The circular walk is around five or six miles which was small enough to tackle on a day like this.  We didn’t want to go too high due to the bad weather and the wind was absolutely freezing!  My (Angela’s) back was suffering a little bit so Dean stepped up to the plate and carried our lunch, extra jumpers, coffee etc. in his rucksack.

On our way out we passed an old stable that was originally used for housing hunting dogs.  The landowner (James Marshall) who previously owned the Monk Coniston estate, built an ornate stable for his hounds that looked attractive from the road, along with building the Tarn Hows lake for his own pleasure. Apparently the Victorians had this idea that if you did not have a castle on your estate then you built one! 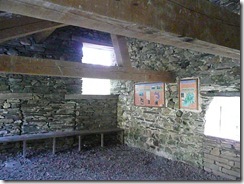 It was a really lovely walk across fields, through woods and along babbling streams. It was also very peaceful and we never saw another sole. We knew there were others around as we were following in their fresh footprints. As we went slightly higher we came across fresh snow and the nearer we got to the lake the sky got darker and darker.  Our original plan was to walk around the whole of the lake but as the weather was closing in we decided to sit and eat our lunch overlooking Tarn Hows.

Tarn Hows is one of the must visit tourist attractions and all year round people come in there cars and park up in one of the National Trust car parks and go off and explore. Just as we were finishing off our lunch a couple came towards us so I asked them if they would take a picture of us and offered to take one of them. This they did and we got chatting about where we had walked from and the man told us that unfortunately he could not walk far anymore as he has a bad knee and is waiting a replacement. We told him that my (Dean’s) mother was recovering from a half knee replacement and explained how she was getting on and during the conversation it came up that their son worked just over the road from where we used to live in Abingdon.  We said our goodbyes and set off again as the weather coming towards us was looking either rainy or snowy and the wind was bitterly cold.

We walked through one of the car parks and before long we were into a wooded area and out of the wind and the peace and tranquillity returned for the rest of our journey back to Coniston.

As we got to the head of Coniston water the snow began so we picked up the pace and before we knew it we were in The Black Bull Inn and were both enjoying a pint of Oliver’s Light Ale from The Coniston Brewery Co. I’d like to think that during our time in Coniston we have boosted the profits of the brewery!!! 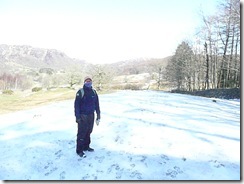 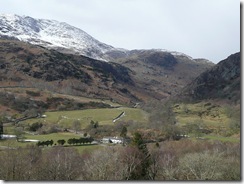 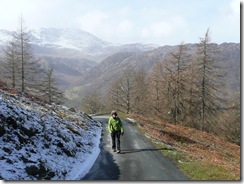 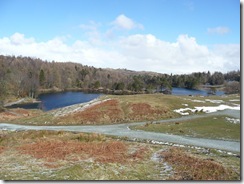 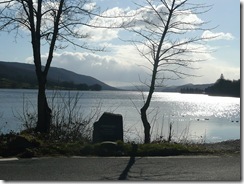 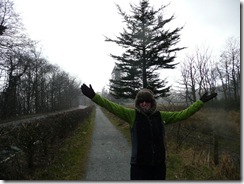 Angela and I decided that there was more to life than working hard to keep up the payments on the mortgage, to pay the gas, electric, phone bills etc. etc. SO............ In 2008 we sold our house, I initially took a year off (Unpaid) and Angela handed in her notice! We bought a motorhome and set off for a year of travelling! This was the best thing we had done in our lives (Apart from getting married) and we have no regrets. During the year I managed to secure a redundancy package which felt very strange. Almost sad as I had worked for the same company for 19 years (BT). It was always our plan to have a whole year off before thinking about the 'W' word. We began applying to the Camping and Caravanning Club (CCC) for the position of Holiday site assistants in August 2009. After the interview, work experience and induction we were finally given a contract at the CCC site in Inverewe (Scotland). Our plan is to work through the summer in the UK then head to Europe to overwinter before coming back to work the following summer season. Hopefully these few words and our blog will inspire others to get off the hamsters wheel and see that there is more to live than having a house and material things. A cliche I know but this is not a rehearsal, life is too short!!! Since our first contract in Scotland we have worked a winter contract in Oxford (never again!) not Oxford but a winter contract. Hereford for two years, living in a yurt for one! And Cornwall. In between our working we have also travelled a bit. Hopefully this website will give you an insight into our alternative lifestyle. Get out there and live the dream!
View all posts by Dean →
This entry was posted in 2013 and tagged 2013 England. Bookmark the permalink.