Sorely in need of some greenery we rode to the Sierra Espuna Natural Park, about an hour away from the site.  The ride out was comfortable along the main autoroutes and with the local map we bought we find our way quite easily.

On our way up we stopped at a view point to get some pictures and figure out our route. 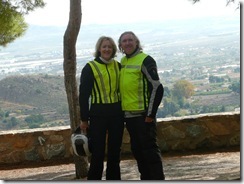 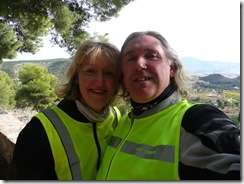 Dean loved it as the roads through the park were excellently maintained, with plenty of hairpin bends to contend with.  I had to be his long range view finder and tell him if anything was coming the other way, so he could power out of the bends without having to worry which side of the road he was on.  They were only really wide enough for one car anyway with hardly any safety barriers either! 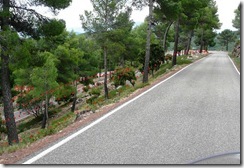 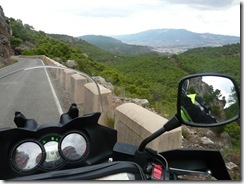 At one point I did close my eyes and just put my faith in him, but he did great.  We stopped for coffee and biscuits about a third of the way up then made the decision to turn back at 1036m (the top is about 1500m) as we still had to get home.  The buttocks were starting to get a bit numb by then as we’d been riding for a good three hours and still had another hour to get back!

Angela and I decided that there was more to life than working hard to keep up the payments on the mortgage, to pay the gas, electric, phone bills etc. etc. SO............ In 2008 we sold our house, I initially took a year off (Unpaid) and Angela handed in her notice! We bought a motorhome and set off for a year of travelling! This was the best thing we had done in our lives (Apart from getting married) and we have no regrets. During the year I managed to secure a redundancy package which felt very strange. Almost sad as I had worked for the same company for 19 years (BT). It was always our plan to have a whole year off before thinking about the 'W' word. We began applying to the Camping and Caravanning Club (CCC) for the position of Holiday site assistants in August 2009. After the interview, work experience and induction we were finally given a contract at the CCC site in Inverewe (Scotland). Our plan is to work through the summer in the UK then head to Europe to overwinter before coming back to work the following summer season. Hopefully these few words and our blog will inspire others to get off the hamsters wheel and see that there is more to live than having a house and material things. A cliche I know but this is not a rehearsal, life is too short!!! Since our first contract in Scotland we have worked a winter contract in Oxford (never again!) not Oxford but a winter contract. Hereford for two years, living in a yurt for one! And Cornwall. In between our working we have also travelled a bit. Hopefully this website will give you an insight into our alternative lifestyle. Get out there and live the dream!
View all posts by Dean →
This entry was posted in 2011 and tagged 2011 Spain. Bookmark the permalink.